Magnetykes, an award winning magnetic toy with a comic book

Do you remember your childhood days when you have seen the magnet for the very first time? It must have had a magnificent moment for you. Isn’t it?

Magnets are one of the most attractive objects for any kid as it is no less than magic for anyone initially. The two magnets interlocking so fast and then an undetectable power that stops you pushing them together seem just astounding. This was the time of traditional magnets that came in the shape of an ordinary bar or horseshoe. However, now to make the power of magnets more interesting and memorable for the children, Magnetykes has come in the market.

Are you confused as what this term means? Don’t worry. Today we are going to talk about this magnificent object named Magnetykes. So, let’s begin: 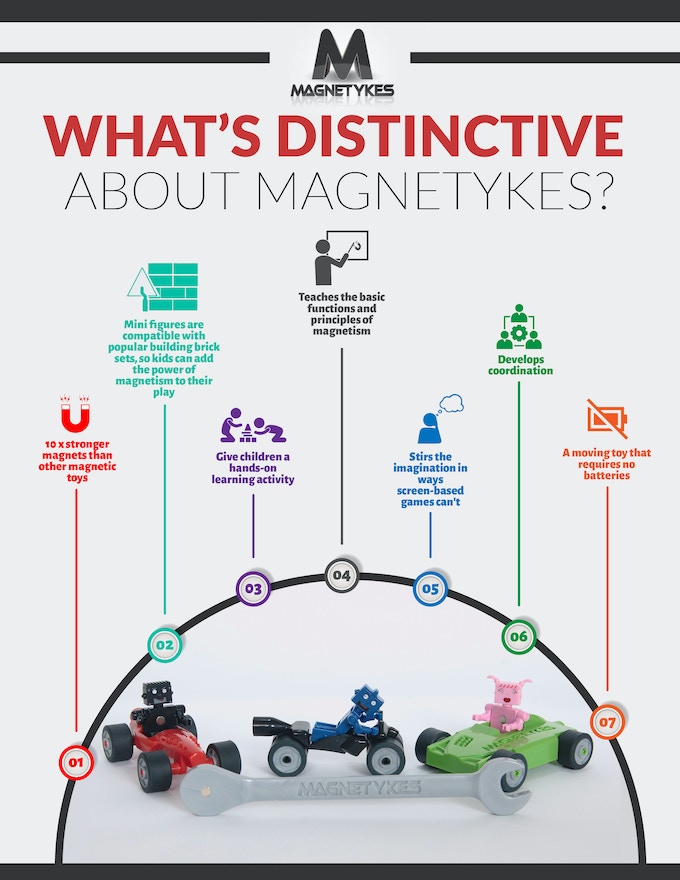 Being a parent, you would definitely wish to see the vibe of astonishment on your child’s face when they get to experience the intensity of magnetic power. Magnetykes is one such award-winning toy discovered by an amazing personality named Scott Adams that looks like a moving robot that children see in the comic books. It is a magnetic robot that incorporates moving arms, legs and head. Each part of the object body has its own magnetic property that has been explained in the comic book come along with it.

There are various highlights of the Magnetykes that it is important for you to know. All the features of the magnetic toy have been discussed below:

Magnetykes toy is a major of three kinds: cobalt, lodestone, and magnesia. Each of these Magnetykes has its own vehicle and a glossy bit of sheet metal available with a comic book in to assist your young one as to how to assemble the toy with utmost convenience. One of the unique things that differentiate it from every other toy is that no similar toy like Magnetykes is currently present in the market. Additionally, no batteries or cell is required to run the toy and the material by which the toy is made from is of high quality that makes the toy last longer.

As we all know that today the majority of the kids spend most of their time on their smartphones or laptops. This not only impacts their physical health but also their mental well-being. Magnetykes is a toy that keeps children occupied in getting real educational benefits. This not only provides them a fun experience but also inculcate knowledge of world science which leads to the development of their mind in this field.

The special highlight of Magnetykes toy is the comic book that came along with the toy.  This comic book takes the children back to the time when this stunning magnetic property has been discovered by the scientists. It introduces the children of today’s generation with that brilliant age of 1950s where magnets were first founded and explained to the whole world. The comic book also instructs the kid as to how to use the toy and assemble it.

Along with all other highlights, the packaging of the Magnetykes toy is extremely extraordinary. The toy just needs a hole of the sheet metal to cover and the figures are shown directly on it. The toy is ten times stronger than any ordinary magnetic toy available in the market. Also, the toy is super safe for your youngster to use. Magnetykes enhance the creative skills of the mind of the young generation and forces them to think in a broader way.

Security should be the first priority of every parent for their children. Magnetykes is a completely authorized and an authenticated toy that has won various awards already. Various awards that this toy has grabbed are Mom’s choice award, family choice awards, Dr. Toy award, Tillywig award, and last but not the least creative child award. As a parent or a teacher, it is our responsibility to get our children to encounter with toys like Magnetykes that develops their growing mind so that they can think much more than their potentiality.

So, this was all about the Magnetykes, an award-winning magnet toy with a comic book.

What is محفظة ليدجر لايف ?

How does the day trading help to get a short time profit?